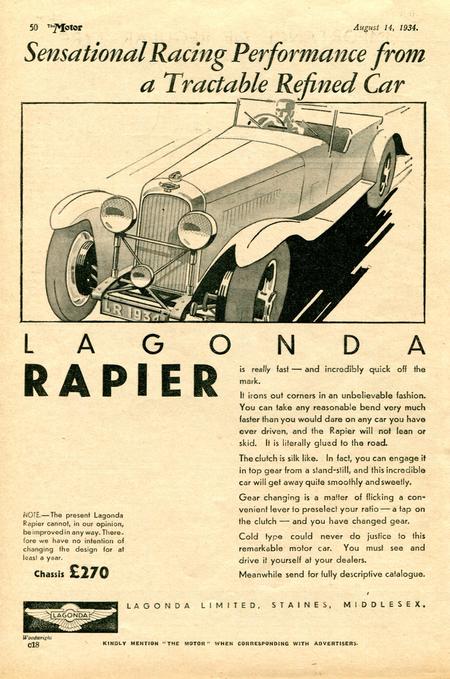 The Lagonda Company was founded by an American, Wilbur Gunn, in 1900 when he set up premises in Staines, Middlesex.  He initially built motorcycles and tricars but in 1910 after a run-in with the receiver, Gunn bought back the company and he started to build motorcars. The first was a water-cooled twin of 10hp and the company then proceeded to build ll, 14, 16 and l8hp models. After munitions work during the First World War, production restarted on the 11hp model, known as the 11.1 and which later was upgraded to 11.9. Wilbur Gunn died in 1920 and the company was carried on by the existing directors. The 1920s saw an increase in the number of Lagonda models produced, including the 4 cylinder 14/60 and six cylinder 16/65. The 14/60 later became known as the 2 litre whilst the 16/65 grew into the 3 litre. In the early 1930s, the Lagonda Company decided to diversify even further and proposed two new models, the 10hp Rapier and the 4 1/2 litre.

It was in 1933 that the designs of the Rapier were first set down, Tim Ashcroft being responsible for the engine design which was to be a sophisticated twin overhead cam shaft 1,100cc unit. It was originally designed to be in aluminium but cost precluded this. There was not time to modify the drawings and the engine was built in cast iron but with aluminium dimensions. This meant it was extremely robust and even though this made it fairly heavy, it also endowed it with longevity. The drive was transmitted to the rear axle via an ENV Type 75 preselector gearbox. Later a single plate dry clutch was incorporated to stop the rapid wear of first gear band. The chassis was designed by Charles King and consisted of channel side members with tubular cross members, all bolted together. Two prototypes were ready for the 1933 Motor Show at Olympia, one on the stand and the other as a demonstrator. There is some confusion as to which of the two was on the stand but it is thought to have been APJ 988, registered on 3rd October 1933, with its John Charles body removed to display the chassis. The second prototype had a body by Whittingham and Mitchel and as the demonstrator, it was presumably on trade plates, as it was not registered as BPC 44, until 1st January 1934. This became Tim Ashcroft's personal transport. Both prototypes still exist.

After a number of modifications had been made to the design, which included engine improvements and lengthening the chassis to accommodate true 4 seater bodywork, the car was at last available for sale in March 1934 with a choice of bodies by Abbott, these being Tourer, Fixed Head Coupe and later Drop Head Coupe and four light saloon, this latter being made in small numbers and none now known to exist. Later other body makes were available, notably Maltby, and several one offs by Corinthian, All Weather Motor Bodies, Whittingham and Mitchel and others.  A smart 2 seater, built by Newns and now known as the Eagle but at the time known as the Warwick Wright Special, was marketed. Only a dozen or so of these latter were built but Newns also put three 4 door Eagle pillarless saloon bodies on Rapier chassis, one of which survives. It is not known exactly how many Rapiers were intended to be built but it is thought that an initial order of 500 engines was put out to Coventry Climax for manufacture. Dobsons and de Clifford Ltd, distributors of Staines, prepared one or two road cars with minor modifications which included reducing the capacity from l,l04cc to l,086cc. A few of these had special two seater bodies by John Charles, with a small fin on the tail and with a de Clifford Special badge above the Lagonda radiator badge. Some of their standard cars also bore the de Clifford badge. Lord de Clifford entered a modified Rapier at Le Mans in 1935, co-driven by Charles Brackenbury.  The car finished in 168h place, running the final 3 hours on only 3 cylinders and qualifying for the Rudge Whitworth Cup. An offset single seater racing Rapier was built for Roy Eccles in the summer of 1935. Both these cars still exist.

Towards the end of 1935, when perhaps 300 or so Rapiers had been sold, the Lagonda Company went into receivership. The remaining Rapier parts were sold off to Tim Ashcroft, Bill Oates, an ex- Lagonda Company director, and Nevil Brockelbank, who set up Rapier Cars Ltd. to assemble the remaining parts as Rapiers. The radiator sported a Rapier badge as distinct from Lagonda. The mechanics were almost identical to the Lagonda Rapiers and it is believed - although there is no definite proof - that some of these later engines were reduced to bring the size down to 1,086cc instead of the l,104cc of the original. Bodies were mostly by Ranalah and included 4 seater Tourer, Drop-Head Coupe and four light saloon, the latter being very rare and none now existing. One two seater Ranalah was built, possibly to the order of its first owner and this still exists. Bertelli put two seater bodies on two chassis one on a Lagonda and the other on a Rapier. The first of the Rapiers was registered in November 1935 and production continued sporadically until 1938 by which time about 40 of them had been sold. The company was still registered in 1946 but no further production took place.

2009 saw the 75th Anniversary of the launch of the Lagonda Rapier to the press, which took place at Great Fosters, a country house near Egham in Surrey, on the 19 July 1934. 75 years later, to the day, on 19  July 2009, 26 Lagonda Rapiers and Rapiers assembled at the same venue (now a 5 star hotel) to celebrate 75 years of the Lagonda Rapier, following the Registers AGM the day before at Brooklands, where 31 Rapiers had been in attendance. A remarkable tribute to the designers of a remarkable car. 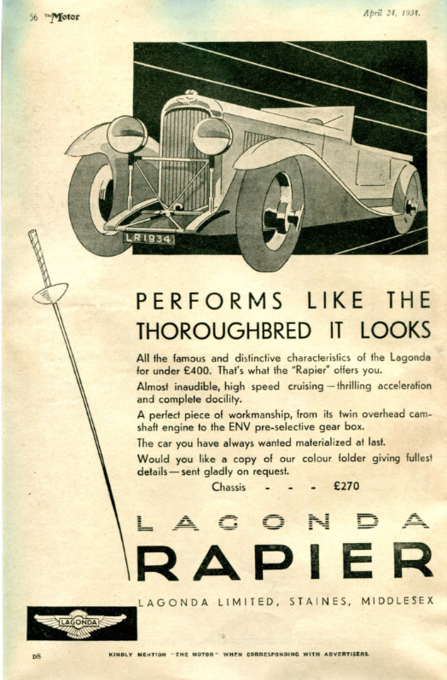